Please contact us if you have any questions about any of the products featured.

For quite a while now we have been using Myler Combination bits with great success.

These bits combine the action of a bit, noseband and headpiece into one, very well designed piece of equipment.

The combined action is quite unique as pressure is dispersed around four different areas - the mouth, nose, chinand poll - rather than being concentrated in just one area which usually results in a resistance if the horse is not happy.

We have used the "Combi" (wide barrel comfort snaffle and low port comfort snaffle mouthpieces) on a wide range of horses at different stages of their training and on those with particular training difficulties (bolting, rushing fences, high head carriage, sensitive mouth, etc.) all with great success whether. It is wonderful for long-reining work as a young horse can be quietly introduced to the action of a bit, hard pulling horses find they have nothing to pull against and the poll pressure created is excellent for horses that need corrective training to lower their head carriage. So pleased are we with the performance of these bits that we now have several in the tack room.

An excellent plus factor is that the bit is available with different mouthpieces to ensure that a horse really can be bitted as comfortably as possible allowing for his mouth design, tongue size and so on whilst maintaining the control and achieving the aim of a supple, polite horse.


There is just to much to say about the Myler Combination bit here, suffice to say they are the answer to many a horse's prayer!

Our experience has been that horses either love it or hate it. For the horse that just doesn't like to have his mouth closed up or feel anything that far down on his nose,, then they were too busy objecting to that to be able to run a fair trial. However for horses that didn't mind the strap around their mouths, then this noseband worked really well both by keeping the bit in place and preventing excessive mouth movement but allowing sufficient which a horse needs in order to function properly. We are not fans of dropped nosebands generally but if you have the requirement to use one, then this is the one to use.

We have been fortunate in that we have really ever had a problem with horses itching.  Ok, in the heat of the summer, most horses will have a bit of a rub - and it is usually the top of the tail that suffers!

We addressed dietary factors but these proved to be to no avail; and an consultation with an alternative therapy practitioner did not reveal any signifcant contributory factors as to why the mare tail rubbed.  However something had to be done as no tail detracted from her appearance.

Early in February we were introduced to "Itch Magic" a product manufactured by Equifeast which claims to sooth irritation and has anti-microbial properties which help to reduce the risk of complicating infections. We haven't looked back.

The mare stopped rubbing her tail immediately even though we did not actually follow the applications instructions to the letter in that we only applied the Itch Magic once instead of twice a day. Within 7 days of no rubbing the mare's tail was clearly improving.  We did not apply any Itch Magic for 5 days which is when the mare began to rub again, so there is clearly an ingredient that takes away the irritation as well as something that "feeds" to promote hari growth.  A further 7-day daily application course followed and then we once again stopped using the product until the mare began to rub again - absolute proof that Itch Magic stops a horse from rubbing. 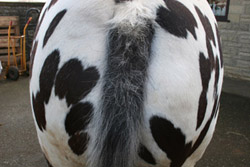 Following a further 7-day course of daily application, we now apply Itch Magic every 3 days - and it is still working - no rubbing and plenty of new, healthy hair growth. We and the mare's owners are delighted.

This photo was taken on 26th February after a period of 5 days without using Equifeast - she has started rubbing again. However there is already significant hair regrowth since use of the product began on 8th February. 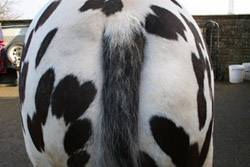 This photo was taken on 7th March.

If you have an itchy horse then we suggest that you give Itch Magic a try. At just £10.95 a bottle you have absolutely nothing to lose but everything to gain. Itch Magic is easy to apply - just pour on a cloth and wipe on to the affected area. It is a colourless, water like liquid that doesn't stain nor does it have an unpleasant odour so often associated with similar products.

For more information on Itch Magic then please to not hesitate to contact us or contact Equifeast directly - www.equifeast.co.uk

We use Bossy's Bibs on our own horses - and those that come to us, but here is something you probably didn't know. 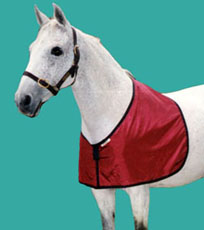 There is a version made that has a zip front so that the Bib can be fitted to horses that are seriously head-shy.The styling is exactly the same as the normal Bib except it has a zip and 2 loops instead of one!

Having suggested a slight design modification, the amended version of the zip Bib has arrived with us and it is now 100%. With a wider velco fastening across the top and the addition of a further velcro fastening at the bottom of the zip there is now no danger of the zip being "pulled" apart/undone. 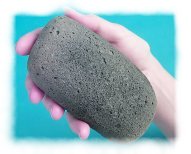 We have been testing a wonderful new grooming product from America called "Groomer's Stone".

Looking like a giant giant pumice stone in the shape of a bath sponge, it is claimed that the Groomer's Stone itis absolutely wonderful for removing bot eggs, dirt and grease as well as massaging the skin.Well after a trial period of a few weeks, here's what we decided:-

The manufacturer's claims are absolutely correct. It works wonderfully well removing dirt and grease from the coat and even large doses of mud!! It has a very gentle action and we doubted whether indeed it could be effective in removing anything form the coat that was ground in, but we've cleaned up quite a few prolific mud rollers in the last few days with amazing results. As the "Stone" has such a gentle action horses with extremely sensitive skin that cannot cope with anything harsher than a body brush on them (making mud cleaning a bathing job!) happily stand still; it can even be used around the eyes. The "Stone" appears to have a massaging and stimulative effect on the skin as, after its use,the coat is very soft and sleek, the oils having come up.

There is a similar product on the market but it is not made of quite the same material and is not so hard-wearing; also being smaller with squared edges it is not so easy to hold and so user-friendly.

Groomer's Stone is certainly a product that we can 100% recommend.